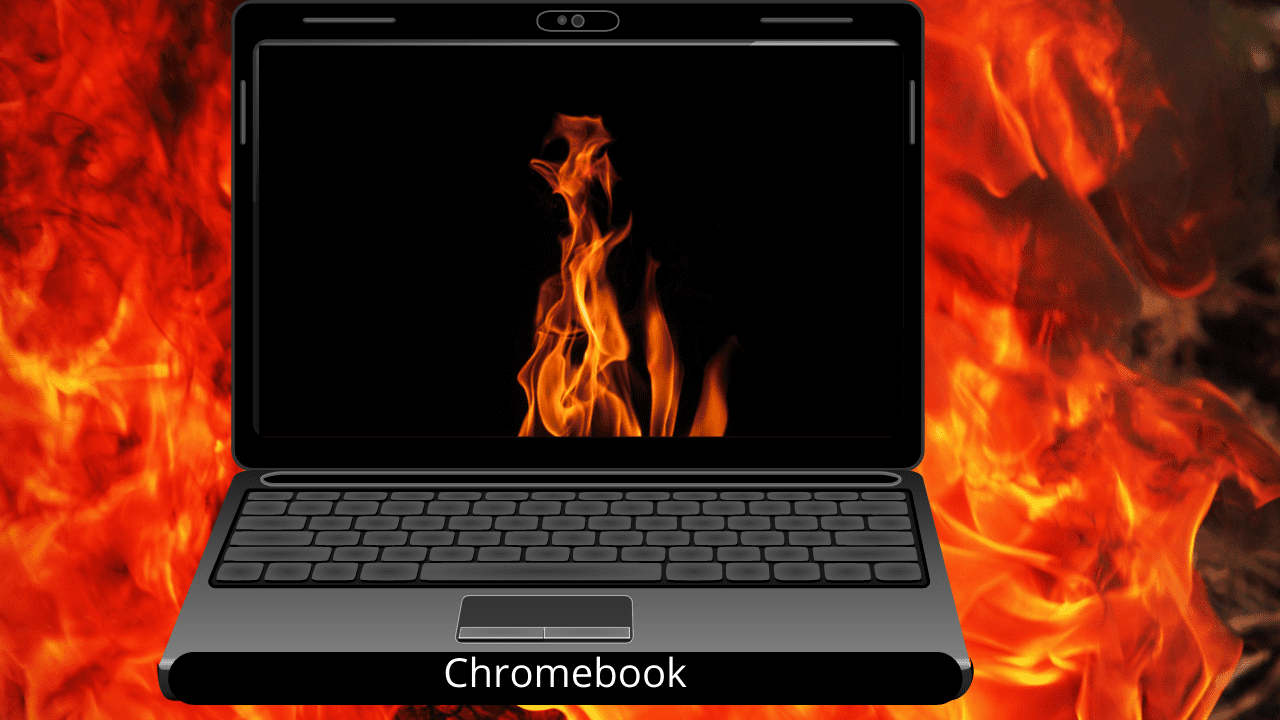 Chromebooks usually become heated owing to passive cooling. But when it gets too hot, it overheats and shuts off. Chromebooks become heated from the bottom panel, keyboard, and screen when they emit heat like any other laptop. The amount of heat generated by your gadget depends on what you’re doing. For example, it takes more power to run heavy applications, apps, and games. This increases heat production.

With no fans and passive cooling, you’ll feel the heat from the vents. No system is heat-proof unless it is 100% efficient.

Why is the Chromebook overheating?

Your Chromebook may overheat for a variety of reasons, for example.

How to Fix Chromebook Overheating

Sometimes passive cooling isn’t enough, and we need to work harder to keep it cool. So here are some ways to cool down your Chromebook quickly.

Use a cooler for your laptop.

To keep your Chromebook cool, use a laptop cooling pad. They are designed to do one thing: dissipate heat from your system so that it can continue to function normally. There are dozens upon dozens of coolers on the market, like the LIANGSTAR laptop cooling pad.

Some employ fans, and some use cooling surfaces. But then, all you have to worry about is choosing an affordable, functional laptop that works with ChromeOS.

What’s the best way to keep my Chromebook cool?

Here are some proven strategies to keep your Chromebook from overheating so that you may use it for an extended period of time.

Keep your computer running at the right temperature so that you can play games, surf the web, or even work on it for long periods of time without experiencing any lag.

Depending on how you use your laptop, you may need more or less cooling capacity. For example, in the case of lengthy gaming, you’ll need a cooling source, but not if you’re multitasking.

Don’t use it when plugged in.

We are all victims of this act, leaving Chromebooks plugged in and charging while not in use. While this may not be ideal for battery life, it does contribute to heat generation. When you charge a battery, it produces heat. But it generates much more when you use your laptop and charge it. So disconnect your gadget while not in use. There is no need to charge when using your Chromebook if the battery is enough. This would reduce heat generation and keep it cold.

Because Chromebooks lack fans, they function by dispersing heat into the air. Because molecules go from high to low concentrations, heat diffuses more efficiently if the environment is colder than the Chromebook. As a result, the Chromebook cools and remains cool faster in cooler areas. But avoid applying it in the sun, on automobiles, or on public transit. Instead, use it in a dark, cool place.

This is the most fantastic way to remain cool. Trying to multitask many applications, tabs, games, and other things simultaneously causes your Chromebook to heat up. Focusing on one job rather than 20 reduces resource use and improves system performance while keeping it cooler. Besides, you are at your best when you are not multitasking.

Your Chromebook’s passive cooling vents are your sole dedicated heat exhaust source. You’re adding to the heat buildup if you use your Chromebook on a surface that blocks the vents. That’s why you need a flat, smooth surface like a table, desk, or Chromebook desk. Laminated table tops are ideal, but steel is good too. But not everyone has a steel desk. Wood surfaces work well, but they must be flat.

Be careful not to drop your Chromebook on soft surfaces like a bed or shag carpet. They obstruct the vent and absorb heat, becoming warm to the touch. Also, using it on carpet may clog the heat vents and make your system dirty.

Why is my Chromebook getting hot when playing Android games?

Chromebooks can now run Android apps. So they can play your Android games. Unfortunately, running these games on Chrome OS strains the machine and consumes resources. Difficulty increases, as does power consumption and heat production. That’s why gaming on a Chromebook might cause overheating.

Try these few things to fix this:

Why is my Chromebook overheating on shutdown?

Your Chromebook will shut down automatically if it becomes too hot. An apparent indicator is a blank screen with no reaction to input attempts, although other signs include a frozen Chromebook.

When your Chromebook reaches a specific temperature, it will automatically shut down so that it can cool down on its own without you having to do anything. You’ll see the status indicator lights come on to switch it on or utilize it, but nothing on display. Allow it to cool before using. This should be resolved.

The problem may be in the system if it regularly overheats to the point where you can’t even perform simple activities. Contact the product’s maker or the retailer where you bought it to get it replaced or repaired.

My Chromebook overheats, and the battery dies quickly.

It’s a regular sign that the battery needs to be changed sooner rather than later. Over time, all batteries deteriorate slowly.

The battery has a smaller capacity and runs out more rapidly, causing a lot of heat to be discarded. In addition, electronic devices often employ lithium-ion batteries, which are susceptible to deterioration when heated. Afterward, the battery’s lifespan is limited, and you must recharge it frequently.

How hot is too hot for a Chromebook?

Chromebooks are sensitive to extremes of temperature. They should not be exposed to temperatures above 100 degrees or below 32 degrees. Putting your Chromebook beneath a blanket, putting it on your car’s dashboard, etc., is not recommended. Make sure you don’t impede airflow when the gadget is running.

Will my Chromebook overheat if I leave it plugged in all the time?

When used under regular settings, Chromebooks do not often overheat. When switched on, the bottom of your Chromebook will grow warm, even heated, but this is normal. Unlike many laptops with more powerful CPUs, Chromebooks don’t have fans.

Can heat break a Chromebook?

Yes, heat may quickly build up inside an overworked computer that isn’t well ventilated, and the risk of overheating only rises when you’re operating your Chromebook in a hot car or outside in full sunshine.

Because most of your activities require cloud-based programs that don’t devour memory and hard drive space, Chromebooks don’t have this problem. However, Chromebooks can become overheated if they are often used in hot, humid environments or on non-flat surfaces, so always use the computer on a flat, firm surface like a desk. If your Chromebook often overheats, try using a cooling platform instead of placing it on your bed or lap.

link to 6 Common Reasons Your MacBook Is Glitching

Apple's MacBook laptops are known for their sleek design and quick processing speeds. Still, many users report laptops' glitches that they believe are caused by outdated software, bloated cache...

Continue Reading
link to How To Fix AirDrop Not Working?

AirDrop, a handy feature on Apple devices, may be used to safely transmit files between Macs and iOS devices through Wi-Fi or Bluetooth. But, does this approach have any disadvantages? If that's how...