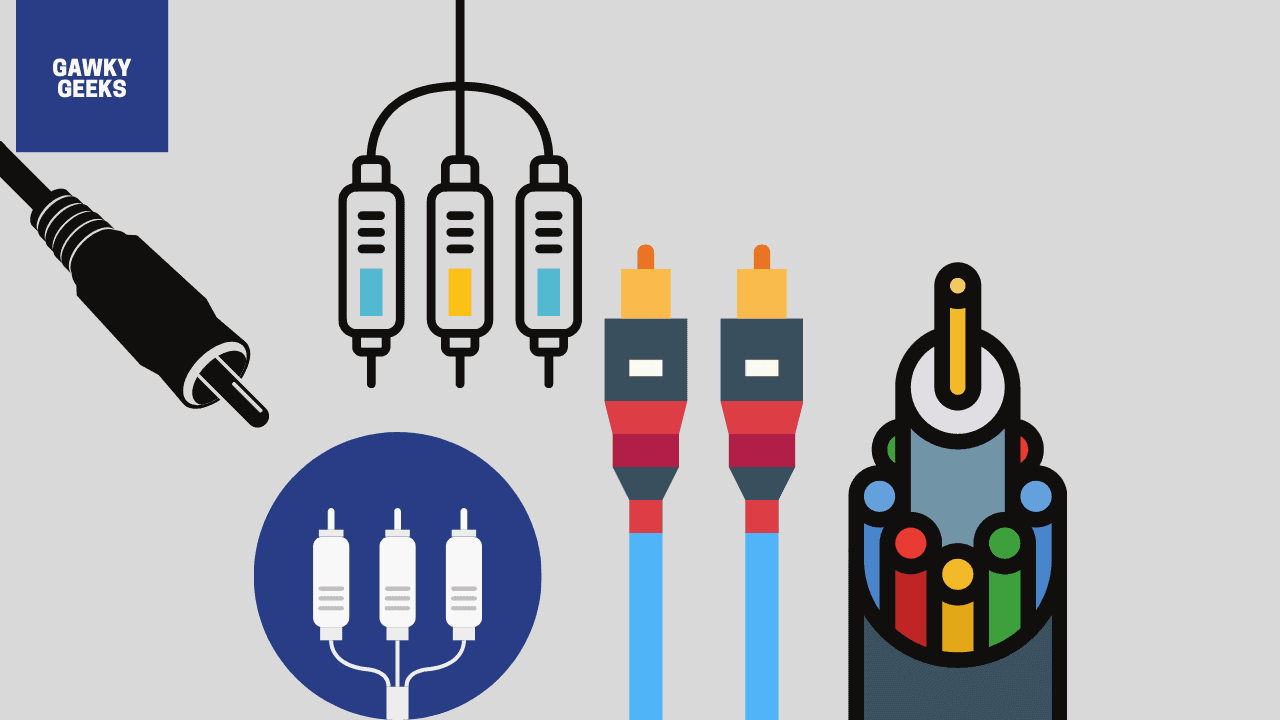 Coaxial cables are thicker in their design and build than RCA audio cables; however, Coaxial cables and RCA cables have the same shielding to minimize interference despite their size.

Should You Use Coaxial Cable To Connect Speakers?

Theoretically, using Coaxial audio cables to connect speakers to an audio source is possible, and you should use them where they are warranted. However, using coaxial cables to transmit audio files to your speakers is not really an efficient way to achieve optimum audio throughput regardless of whether you are transmitting analog or digital audio and video files. At the least setup, you’ll need to either convert or replace the standard F-connectors with an RCA end to achieve the audio or video audio setup that works.

In recent years, as Coaxial cables and RCA are fast becoming less popular and in rapid decline, you are best placed to run a powered subwoofer with an HDMI to RCA converter to connect any speakers and enjoy the best audio possible.

They might look similar but they are not the same. When you are at an instance that involves connecting TVs, players, and sound systems, RCA cables are kind of common. At some points, you might confuse the RCA with coaxial cables, but they ain’t the same.

RCA stands for Radio Corporation of America, which is the name of the company that developed the standard. This is a paired connector that has the one job of connecting to audio and video equipment.

When we come to coaxial cables, these mean “same axis” that’s because it is the way the cable is arranged. This cable is comprised of an inner conductor, which is surrounded by an insulator, of which on top of that is wrapped in a secondary conductor, then a final insulator. If you would cut it in a cross-section way, the concentric circles with alternating conductor and insulator would be revealed.

RCA cabling makes use of a coaxial cable. One thing you have to know is that these RCA cables were specifically designed to use coaxial cabling as indicated by the actual RCA connectors.

A center connector usually connects to the conductor at the core of the coaxial cable but then the circular metal ring also makes contact with the second conductor on the outside perimeter.

Talk about the secondary conductor, it is found on the perimeter and is often used as the ground or as shielding when it comes to the signal passing through the central conductor.

Unlike RCA cables, coaxial has been exposed to a wide range of uses usually when it comes to Radio Frequency applications because it provides excellent shielding against external noise.

A clear explanation and example of this would be older analog cable TV systems and ham or CB radios. It’s also common when it comes to computer applications and telephone networks of which have been superseded a long time ago.

It is a known fact that RCA cables and coaxial cables are rapidly declining when it comes to being used in homes. Times have changed, technology is advancing and they are now being replaced by newer and more advanced connections that provide faster, cleaner, and simpler connections. New interfaces like the HDMI, DVI, and Fiber optics have made RCA cables look old fashioned, useless, and obsolete in modern times.

Coaxial cables are still being used although not for interconnection of household appliances. Coaxial still provides a large number of advantages when it comes to cost, range and shielding for RF installations to continue using it.

In short, RCA is the connector standard while the coaxial is the type of cable. RCA makes use of coaxial cables. Coaxial cables have other uses apart from RCA. RCA is already obsolete while when we talk about coaxial cables, they are still commonly used.

Furthermore, Coaxial connector looks like an RCA connector but it transmits digital signal instead of analog signals. To talk about the design of the digital coaxial cable, it is thicker than the ordinary audio cable just that it uses the same type of shielded coaxial cable which you can use to connect your television to your cable box.

You can use coaxial cable instead of RCA as the as the specifications for video and coaxial digital cables are the same and are to a better standard than audio cables. Many audio cables are made to the same standards even though they don’t need to be for analog audio use and can be used for video or digital audio.

Are RCA cables digital or analog?

If you own an RCA cable, you can use it to connect a variety of audio and video devices like camcorders to TV’S or stereos to speakers. In either instances, RCA cables transmit analog signals, or which might be referred to as non-digital signals. It is with this reason that they cannot be plugged directly into a computer or other digital devices.

What is coaxial cable used for?

Coaxial cables are made use of in transmission lines for radio frequency, video and data signals. In the past, traditionally, they have been used as feed lines to connect radio transmitters and receivers with antennas, internet connections, digital audio and cable television signals.

Coaxial vs RCA, what other notable differences are there?

These cables might look extremely confusing to someone who has not specialized in technological things. These all look extremely similar to one another and although this is the case, they still have different uses.

They are used for different things and have different uses. Let’s now take a look at coaxial and RCA cables more.

You might have seen these cables in your childhood if you are over 21 years of age. These kids of nowadays might not have seen RCA cables although in the past they were used for things like VHS recorders, which is evidence that almost every house had them with their television.

RCA cables have largely been disregarded due to the introduction of HDMI cables but they are still being used in some way or another. In fact, they are still being used in a variety of environments although their main use  now is being with a camcorder so that this way you ought to separate cables for audio and video, that is 2 for the audio and 1 for the video connection.

When you come across a cheap camcorder, you will notice that they don’t use the typical RCA cable, which means that three separate channels and a higher quality recording is allowed. Cheap camcorders typically have lower quality transfers and this is down to a lack of a 3 channel jack.

Although, we might term RCAs as RCA cables, we are in fact referring to the connector and not necessarily the cable itself. These cables work by transmitting different information to each other.

In the RCA cables, the red and white cables are focussed on transmitting sound but the video is carried by the video data. It also has to be noted that there are two different types of RCA connect and the RCA cable in discussion is the composite RCA cable which is the most common.

Price – these cables can be purchased at a relatively cheap price or to produce which is why many people see them as a great choice especially seeing that there’s a lot of distance needed with a coaxial cable.

Easy installation – these cables are one of the cables you will come across which are very easy to install, as it can be evidenced from how easily from his easy it is to wire a TV aerial. In addition to being easy to install, they are also great and easy when it comes to extending the length of it too.

All these are the advantages of a coaxial cable although they have one main drawback which is that when they use an electrical connei, they can cause buzzing, which is a common problem with coaxial cables.

RCA cables are rapidly designing in terms of use due to the introduction of HDMIs while Coaxial cables are still being used at large due to their cheap price, easy installation and capacity.