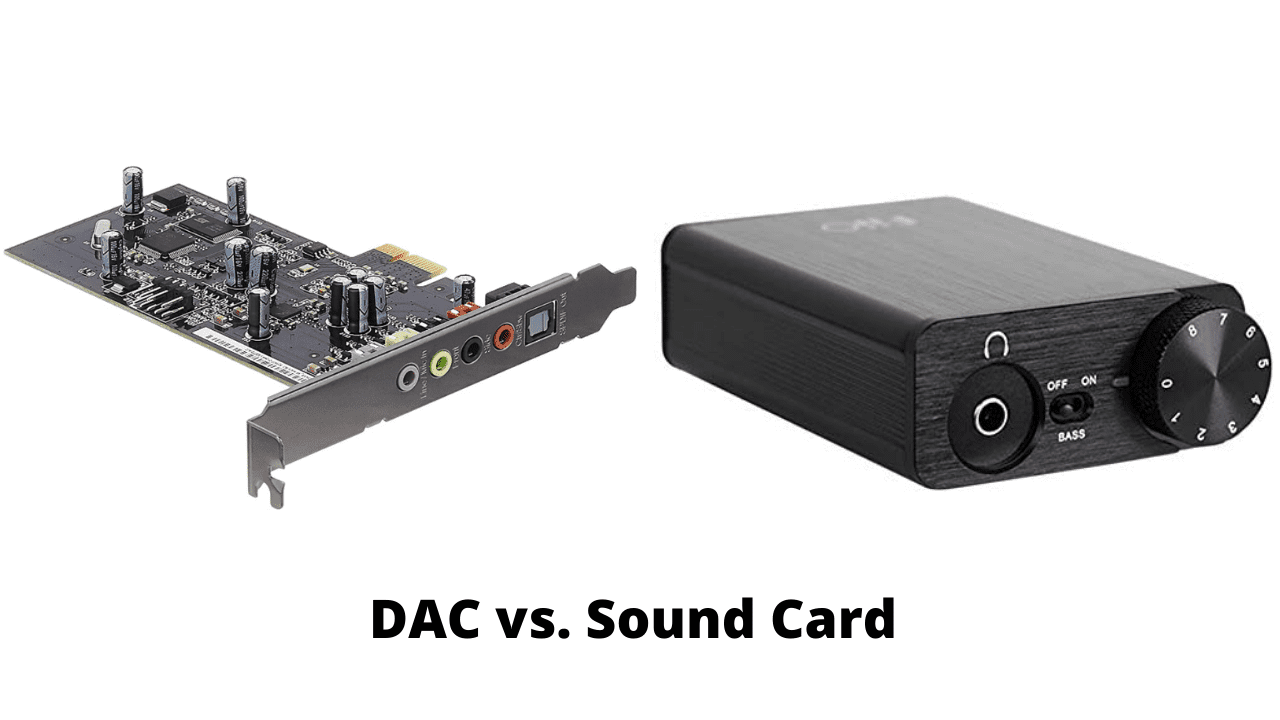 A soundcard and DAC are different; choosing which is worth buying can be very difficult. However, the truth is that it all depends on the consumer. An external DAC/Amp combo system is superior in terms of technical requirements and sound because it not only offers a much clearer sound but it can also power more demanding headphones. However, we cannot deny that using a sound card is relevant, so the final decision is yours. There is no way around it if you have a job that needs a sound card, so if you only want to improve your audio experience, you should get a DAC.

If sound quality is your main priority, a DAC is unquestionably the better option. A sound card is helpful because it takes up no room on your desk, but it does take up space in your case. The issue is that it is also exposed to all of the electrical noise in your computer case, which degrades sound quality. As a result, a DAC is preferable because it is located outside of your case and is not susceptible to intrusion.

What is a sound card?

A sound card, like a GPU, is a PCI-E expansion card, but it serves a different function. The sound card in a computer converts an audio signal into one that humans can hear. It also has a DAC and a USB port. Like the combos, this has a DAC and an amplifier, but it varies because it has an audio processor.

Sound cards can also be built into the motherboard using components identical to those used on plug-in cards. However, a sound card is still commonly used to refer to an integrated sound system.

Modern video cards, including HDMI, support sound processing hardware, allowing them to emit sound along with video through the connector; previously, they relied on a S/PDIF link to the motherboard or sound card.

Advantages of a Sound Card

Another benefit of the sound card is the value to money proposition. The good quality sound cards are not as expensive as DAC/Amp combos, and we also see regular discounts on many more popular ones. These are also good deals for used markets to be hunted down, and usually, you can find an older top-of-the-line expensive sound card for a fraction of the price.

This function is beneficial when you have a headphone missing in one place—the sound card round off the sound with all the appropriate EQs to improve user experience.

The most significant disadvantage is a lack of creativity in the industry. As time has passed, technology has remained relatively unchanged. There are minor improvements in efficiency and sound quality with each iteration of sound cards, but not enough to justify a next-generation purchase.

What is a DAC?

A DAC essentially transforms a digital audio signal to an analog signal, playing via headphones or speakers. The analog headphone jack appears to be a disappearing function, DAC chips are located in the source component you’re listening to, whether a computer, a portable music player or a mobile.

A DAC essentially converts a digital audio signal to an analog signal, allowing your headphones to produce sound.

Standalone DACs, like headphone amplifiers, arose as a result of poor audio quality in the consumer market. The weakest links in the audio chain could be revealed by high-end headphones and speakers and their DACs and output stages. It became evident as people began using their computers as audio sources.

The DAC may have inadequate filtering, be improperly shielded, add noise, or have a poorly controlled power supply, lowering the quality of the rendered output. In addition, there were a lot of MP3s with low sampling rates and incorrectly encoded MP3s.

But digital music has advanced significantly. Better technology has made even the cheapest chips virtually inaudible, and the standard of digital music has soared beyond the point of diminishing returns. Moreover, it used to be the case that your digital Walkman or laptop’s internal DAC chip couldn’t handle high-bitrate listening. There are now a plethora of portable devices that can.

One of the main advantages of the DAC is that it helps to improve sound quality. The sound quality provided is outstanding but is not susceptible to any interference, unlike the sound card. Therefore it will offer a very clear sound.

How does it work?

The peak and valley of each wave are called loops, and the number of cycles per second is called frequency. You’re probably aware that a sound’s frequency correlates to its note. So, higher note, higher frequency.

The DAC’s role is to convert a set of digital samples that make up a stored recording into a pleasant continuous analog signal. To do so, it must convert bits of data from digital files into an analog electrical signal at a rate of thousands of times per second or samples. The device then generates a wave that crosses all of those lines. Since DACs aren’t flawless, this can often trigger issues. Jitter, high-frequency mirroring, a small dynamic range, and a low bitrate are all issues.

Before getting into how things work, you should be familiar with three terms: bitrate, bit depth, and sample rate.

A sound card is also known as an audio card. This is simply an internal expansion card that allows audio signals to be input and output to and from a computer through computer programs. In addition, external audio interfaces used for advanced audio applications are referred to as sound cards.

When do I use a DAC?

With an external DAC, the noise in your device is removed from your music; however, the advantages are minimal. Your existing system, whether a monitor, tablet, or home system, either has apparent noise, undesirable distortion, or artifacts or is unable to run at the bitrate of your audio files.

Otherwise, try upgrading your DAC if you’ve determined that it’s the bottleneck in your playback system and that it’ll make a big difference.

The FiiO E10K is a fantastic alternative for around $100 if you want an amplifier to go with the DAC, so you don’t have to bother about it.

You could also get an ODAC or an O2 amp + ODAC mix, although this may be overkill. But don’t spend much money on it. It’s not worth it.

Which is better, sound card or DAC?

If you’re planning on employing any high-quality headphones, a sound card will undoubtedly be of assistance. The advantage of using a USB DAC is that it can be used on a laptop or other devices that you may use, allowing you to enjoy superior sound quality anywhere you go. Of course, it is entirely up to you to make your decision.

Your DSD files may be played back in real DSD audio on a Mac or PC if you use Playback Designs or any true DSD DAC to replace your sound card. To bypass the soundcard after you’ve completed this configuration, be sure to pick the DSD DAC as your output device.

Do pro gamers use sound cards?

Do you need an amplifier if you have a sound card?

A soundcard is often a single component that includes the DAC and the amplifier, allowing users to connect their speakers in a single step. But, no, sound cards are still capable of transmitting lines out, and although some may have a small amplifier for headphones, none can drive a speaker.

Is a sound card worth it?

The sound card and speakers/headphones are significant components in terms of overall audio quality, regardless of how they are connected. You may improve the precision and immersiveness of your sound by purchasing a high-quality sound card, but if you want to get the most out of it, you’d also need to invest in high-quality speakers and headphones.

A DAC and a soundcard are used in audio equipment. If you are looking for better sound quality, the DAC is better than the sound card. However, the soundcard also has some beneficial uses. For example, it can be helpful to save space as it will not take up any room on your desk. But, the sound quality that it provides is degraded since it is very exposed to electrical noise in the computer case. Therefore, most people prefer to use the DAC since it is not susceptible to noise interference.