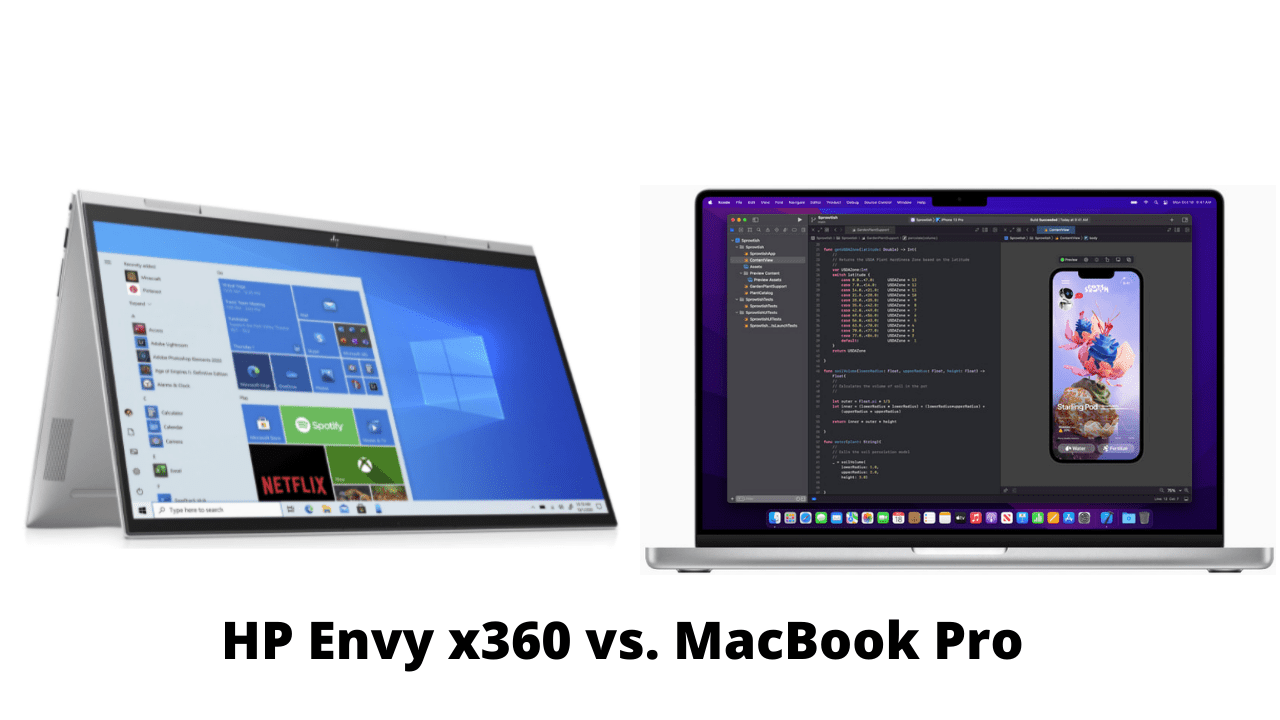 The HP Envy x360 is an HP model that boasts of a stylish all-aluminum chassis powered by AMD Ryzen 5 4500U, which offers excellent performance. In contrast, the MacBook Pro is powered by the Apple M1 chip and provides outstanding performance.

The HP Envy x360 model is much similar to the Spectre, and it boasts a stylish all-aluminum chassis plus a 13-inch touchscreen and a comfortable keyboard. It costs around $799 and has a CPU powered by AMD Ryzen 5 4500U. AMD Radeon Graphics powers the GPU, the RAM is 8 GB, the storage is approximately 256 GB, and the display comes in several 15-inch models. But we shall concentrate on the 13-inch model. The battery lasts about 11 hours and weighs about 2.9 pounds.

This is a very stylish laptop and proves that HP tries its best to sell relatively affordable good products. It has a slim display that is very attractive, and the chassis is compact. It has an 88% screen-to-body ratio.

It has a diminutive footprint which has a small convertible. It is 12 x 7.7 x 0.7 inches which makes it very portable. On the other hand, the aluminum chassis gives it a high-end feel like most expensive all-metal laptops.

It also has a nightfall black finish with an elegant look. In addition to that, it has some stylish accents like the slick HP Logo on the lid, speaker grilles underneath, Envy stamped on the hinge, and some aggressive vents on the spine.

This HP x360 has the flexibility to be transformed into a tablet. The dual hinges have that sturdy feeling and rotate back; you don’t need a lot of effort to do it. In addition, it has a fingerprint sensor located on the bottom row of the keyboard and is quick and reliable.

The HP Envy x360 is also equipped with a good number of ports. There is a USB 3.1 Type-A input on the right side, and there is a microSD card located next to a power connector. There is a second USB 3.1 of type A port, a USB Type C port, and a headphone/mic jack on the other side. The drop jaw hinge for the Type-A port is just unique to use.

It has a 13.3-inch 1080p display which is bright, sharp and has rich and accurate colors. The screen is just too good for such a price of below $1000. The panel is just detailed enough to see things on the screen. In addition, it covers about 108% of the sRGB color gamut, making it more vivid.

It has a chiclet-style, nicely spaced keyboard with good response sensitivity. People with small or large fingers enjoy this keyboard as the keys cover the entire length of the deck. It is also equipped with several shortcuts to the function key row, including a mute microphone button and a kill switch of the webcam. The words per minute rate is 98%, with an average error of only 2%, which is fantastic.

It has a 4.4 x 2.5-inch touchpad wide enough for any user with any fingers. In addition, it is equipped with precision drivers that allow two fingers zooming and pinch to zoom feature.

It has dual speakers located on the bottom with the same Sonic shortcomings as those on the Spectre x360. However, the speakers sound fine at lower volumes, unlike the higher volumes that produce a distortion sound when high.

It has a CPU that AMD powers. The CPU comes with a Ryzen 5 4500U CPU with 8 GB RAM, which provides excellent performance for its price, and it surpasses its Intel-powered rivals by a relatively noticeable margin. On some tests, the MacBook pro was outperformed by this masterpiece. It breezes through demanding workload with ease, and after some tests, it encounters no problems.

Looking at the Geekbench 4.3 overall test performance, it reached 19064, which is quite impressive. Going further to the more demanding Geekbench 5 test, it managed to put up a score of 4617, which is very impressive.

This HP converts a 4K video to 1080p resolution in just 13 minutes 44 seconds with the aid of the handbrake app. Video editors would enjoy using this on average.

It is equipped with integrated Radeon Graphics, which performs exceptionally well. Moreover, it can play demanding movies at a reasonable frame per second.

The battery is just fantastic, and it can last an entire workday without requiring to be charged. Using the old and new versions of edge, the old one lasted a staggering 12 hours and 52 minutes while the new one lasted about 10 hours and 45 minutes. It is one of the laptops with the best battery life.

It is equipped with a 720p webcam which is okay for casual video calls. Moreover, you can take a decent selfie with this webcam.

The camera is located above the display, which is quite good. However, the camera can still use some improvement.

It does not heat up quickly. However, tests were conducted, and the temperatures reached were not worrying. The HP Envy x360 needs to consolidate its apps. The Envy runs Windows 10, and it has a one-year warranty. It has the HP support assist, which allows an easy way to download up-to-date software and drivers.

Overall, HP Envy x360 is the best sub-$1000 laptop on the market. The performance is just too good for its price. Its bright, vivid display, luxurious aluminum chassis, and fast performance are just impressive. The two USB ports provided and the keyboard are just so comfortable. It’s like the Spectre x360, only at a lower price. It’s the perfect laptop for those wanting a Premium notebook at an affordable price.

Apple’s M1 CPU powers the laptop, and it remains the workhorse for those wanting a compact MacOS laptop that is powerful enough to perform Processor intensive workflows. It has that enduring look. It’s slightly larger than most of its windows competitors.

The MacBook Pro measures 0.61 by 12 by 8.4 inches, and it weighs about 3 pounds. It feels sturdy, not heavy. It has a minor chassis that comes with three ports: two USB Type C connectors and a 3.5 mm headphone jack. Nowadays, many peripherals come with USB-C Connectors.

You can configure the MacBook Pro with the Brand New M1 chip. You can also configure it with Processors from Intel’s Core i5 and Core i7 families.

It has a Retina display which remains relatively constant as in the past models. It has a 13.3-inch panel with a high native resolution between full HD and 4K. At its peak resolution, it displays 2560 by 1600 pixels. The color appearance is also brilliant and sharp. In addition, the panel can display an entire P3 color gamut without a touchscreen.

The trackpad is just excellent, and it is oversized for great comfort. The cursor movements are just hyper-accurate, and the haptic feedback is just fantastic and provides a uniform clicking sensation regardless of where your fingertip is located. It has a one-year limited warranty.

It handles all computational functions, graphics inclusive with ease, and it uses a different architecture than the core i5 or core i7; hence the apps to be used need to be modified.

We used several benchmarks to judge the performance of the multimedia editors and other power users. For example, it takes about 17 minutes to transcode a clip of 4k video to 1080p, less than the HP x360. But upon using a beta version of the handbrake app can reduce the time taken to just 8 minutes, which is just fast.

When it comes to 3D rendering, it provides a rather extraordinary performance.

They support a GFXBench 5 test which supports Apple’s Metal graphics API, which can achieve a frame rate of around 80fps which is even enough for good gameplay.

The MacBook Pro offers a staggering and excellent battery life. The battery can last up to 22 hours, which is impressive compared to its competitors.

Pros and cons of MacBook Pro

It is a good machine from the Apple company. Apple’s M1 CPU powers it. It remains the workhorse for those wanting a compact MacOS laptop that is powerful enough to perform Processor intensive workflows. It has that enduring look. It’s slightly larger than most of its windows competitors.

The choice between HP Envy x360 vs. MacBook Pro is yours, but both laptops provide excellent features and performances. The only notable is the price difference; the HP envy is cheaper than the MacBook Pro, Although the services offered are almost the same.