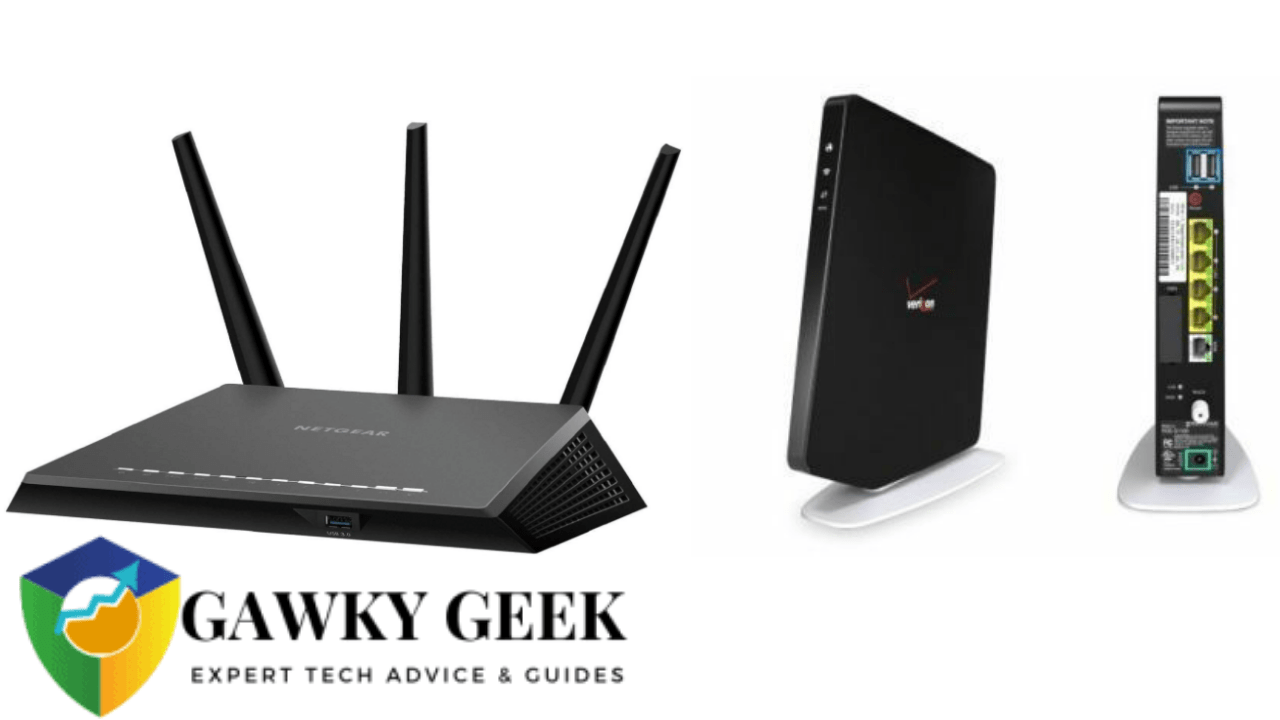 When looking for the best router for your home or business, we all want a router the can promise speed, stability, and enough functionalities. I am taking a head-on review on the two most used WiFi routers, the Fios quantum gateway router vs Netgear nighthawk. For this review, I will be comparing Fios quantum gateway G1100 and Netgear nighthawk R7000 WiFi router AC1900. I recently did a comparison between the Verizon Fios G3100 vs G1100, it is worth checking out. But first, which is better, G1100 or R7000?

The Fios quantum gateway G1100 is better than the R7000 Nighthawk when it comes to features like a smartphone app, sleek design, and easy setup, but the R7000 Nighthawk has speed, USB performance, and chipset for Turbo QAM that boosts the speed. The two routers can be pricy but the Fios G1100 cost above R7000.

The Netgear Nighthawk R7000 WiFi router AC1900 is not just any router, but one of the high sort routers, from the design to performance and setup. The WiFi router has a lot to offer and I will be going through each and everything that makes it worthwhile.

Just looking or admiring at the R7000 Nighthawk design, you wouldn’t be judged for that, the design is somewhat my favorite just because it is functional and makes sense. It has these three external antennas that set it apart, it has angular lines, sleek design, and matt black finish. The R7000 router weighs 750g, that’s some durable and quality built construction.

With the design comes some other important stuff to note, like the activity lights that light up with power, WiFi, WPS, USB, Ethernet while ports are in use. There is also a front USB port, even though this isn’t what I would want, but hey, many will love it, so I leave you with that to decide. For designs, Netgear deserves a thumbs up even though it appears bulky.

For the features, I will start by point out the branding which is AC1900, what this means is that the router is fitted with Broadcom BCM47o8A chipset. This chipset is for Turbo QAM that boosts the speed to 802.11n 2.4GHz, and you can get up to 1900Mbps with this router.

This is where Netgear differs from other brands, the R7000 Nighthawk has dual-core 800MHz ARM Cortex A9 processors, clocking at 1GHz, and also has 256MB and 128MB native flash memory. Just like the Fios quantum G1100, the R7000 Nighthawk also has Beamforming, this is to enable the router channel network signals to connected devices instead of spreading signals everywhere. The Netgear also has a custom URL which is free in case you a personal FTP server, it has WPA/WPA2 security, VPN and guest support network, and aforementioned WPS.

When it comes to set up, the R7000 is not the easiest, you have to use an open wireless signal to boot the first time, this connects you and opens a browser this is where you can follow on with the setup process. Then you can begin to choose your password and SSID.

Here you can either use the password on the router or choose to use WPS, not forgetting that you will be directed to Netgear Genie the setup wizard. Not many routers do this, the R7000 splits the 5HGz and 2.4GHz signals to separate SSIDs.

The R7000 has a great performance and top design, very fast speed, this is also for all Ac1900 models which are relatively fast. Another point to note is the USB performance especially if added with USB storage, this will change everything and even better. To make a better recommendation, the R7000 Nighthawk tops with the fastest peak for a router, the USB performance is noncomparable.

Many will argue or agree with me that the Quantum G1100 router is a good router with many features. Fios gateways are a single point of access for connected devices outside the home internet network. The Fios quantum gateway router is more like a traffic handler that ensures your apartment or hallways are orderly and functional.

The G1100 design is slim, compact, and able to fit in even the smallest spaces, even though it has an upright design but it can be placed flat on a bookshelf. The router has two LED icons for internet status and WiFi status and WPS buttons on the front panel. With the WPS button, you can set a network password, pair the router with other WPS devices, and reboot the router.

It has rear panel ports including Ethernet port, LAN ports, Coaxial port, USB ports, reset button, and power inlet. The R7000 sits flat but the G1100 can stand upright or flat, and while the R7000 has three antennas, the G1100 has no visible antenna.

The G1100 is compatible with 802.11ac standards, works with 802.11bhn. Your confidentiality is protected because the router has a guest account setup including surname and password, and also has parental control settings. When it comes to controlling, the G1100 has its smartphone app called “My Fios app”, you can control and adjust router settings from anywhere.

The router also comes with two bands, the 2.4GHz, and 5GHz bands, if you have so many devices then this allows you to connect multiple devices and still maintain good speed. The more you upload and download, the more band is required, this is why you need a router with a high band. The router boost of a dual-core processor for good performance, regardless of whether you are connected wirelessly of wire, the processor takes care of stead connection.

Comparing to the latest model, the Verizon G3100, the range of the G1100 is not the best especially for multiple rooms in the house, you will require a repeater. The network connection range is 325 feet. Enjoy the Beamforming, this is to enable the router channel network signals to connected devices instead of spreading signals everywhere.

At first sight, one may think there will be a hassle with the setup, that’s not true, the setup is pretty easy. You don’t need software or install CD to get set up, just plug in your computer devices and follow the on-screen guide.

The G1100 provides access to usable ports for multiples devices, it has good internet speed especially for uploads and downloads and the band helps maintain this, it is easy to install and supports different network standards.

Does Netgear Nighthawk work with Fios?

Netgear nighthawk will not replace the Fios router device, but it can work in conjunction with Fios devices, but you have to configure the FiOS router either in modern only mode or bridge mode and set the Netgear router as the primary router.

How do I connect my Netgear Nighthawk to Verizon FIOS?

To connect Netgear nighthawk to Verizon Fios, first, turn off the Fios gateway WiFi and then install the new router in AP mode.

You can use this step-by-step guide for any WiFi band addition.