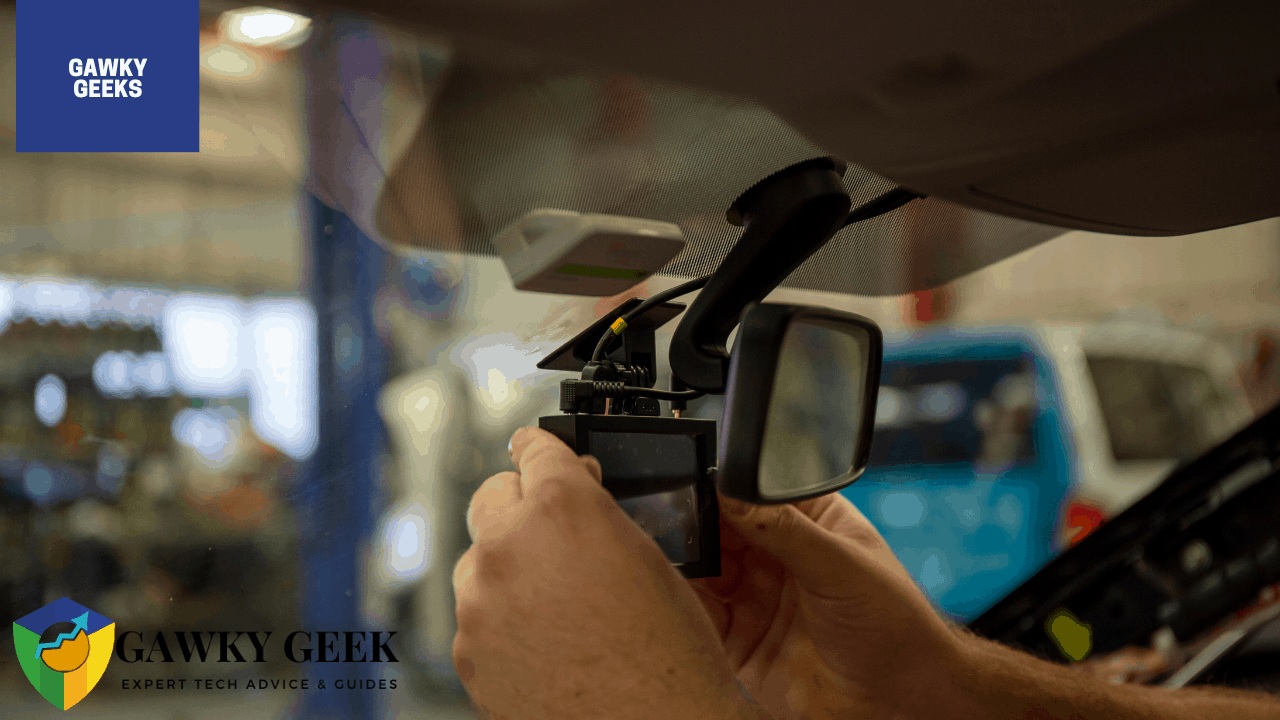 The popularity in the use of Dash cameras on the road in recent years hasn’t been without its own drama and letdowns. In some countries like the UK, dash cameras has been successfully used to prosecute traffic offenses in courts but also used to prove to Insurance companies that a motorist deserves compensation or not. But, do dash cameras record sound?

Dash Cameras do record clear sound inside and outside of the vehicle on which they have been set up and installed to record video with sound. And, that’s because the majority of dash cameras are equipped with an audio recording option which makes sound recording possible. So, as long as you choose the audio recording option, When you have a dash camera installed, be assured that the sound will be recorded in addition to the video footage.

So, if you are looking at getting a dashcam installed on your, rest assured that the footage recorded is going to be equipped with sound. The footage of a Dash camera is usually saved to a memory card which can later on be transferred to a computer. In most cases, typically every 5 minutes that you drive, the footage is saved into a file.

This makes sure that the file size is small and any incident can be found easily as one will only target the specific file of that time. In the case that your memory card is full, this will result in your dash camera stopping recording unless there is a means that some old files should be overwritten when the storage is full.

The footage from these cams is usually uploaded directly to the cloud or it makes use of WiFi for quick access.

How Do Dash Cameras Work?

There are so many types of cameras that imply that they work differently. This is the same case with Dash cameras, the way they work is different from other cameras.

You might choose to use any recording device as a dash camera but there are some factors that you ought to know and consider in the case that you want to purchase a built-in dash camera before you hack something together.

Several factors set Dash cameras apart from other handheld and simple recording devices. These factors make dashboard cameras easier and a better option than the other recording devices. It is very rare to capture some moments while driving and that’s where a dash camera comes in and does its magic.

Unlike general purpose recording devices, these dashboard cameras in the discussion are not usually the type to be no-frills which usually do not have fancy bells and whistles as in the car with power switches and recording controls. A typical dashboard camera consists of a few basic components.

A video camera: This is the most important thing a dash cam needs as this is what enables it to capture the action.

Hard-wired power inputs: Some choose to source power of their dash cams from a battery. But this poses unforeseen struggles when you want to charge the battery. Hence it is vital to wire the dash cam directly into your vehicle’s electrical system or in another instance, you can plug it into the cigarette lighter and then you are good to go.

Built-in or removable solid-state storage media: you can choose to use a dash cam that has a built-in memory but it is not recommendable. It is better to use a dashcam whose memory is removable.

Make sure to purchase a dashboard camera that supports and accepts micro SD cards and be free from such trouble.

You can tell how these dashboard cameras work by taking a look and understanding how their components work.

Dashboard cameras are wired into a circuit and the ignition key is the way to switch them on and off. When you switch the car on, it implies that the dash camera is switched on as well.

If you wanna have extra security while ensuring that there is a small risk of your car battery going dead, the dashcam can be wired into a circuit with the aim of being hot at all times.

Dashboard cameras do not have recording controls as these cameras are made in a way that they should record continuously the moment they are powered up.

The only option that comes with dash cameras is to start recording when motion is seen. Having this is mind, you can see these simple devices are designed to automatically turn on and start recording the moment the car is turned on without any need for input or any driver’s interaction.

This can be compared to general-purpose recording devices just that you use any recording device as a dash camera, only difference is you would have to turn it on and make it record every time that you are in your car, which is quite hectic.

The bad part about this is you can get yourself in an accident and that day might be that you forgot to turn your recording device on hence it would make you realize the importance of a built-in dashboard camera.

Why Do You Need A Dash Cam?

It is not that every car needs to have a Dash cam but they can prove to come in handy when you have been involved in an accident and the footage might act as evidence on what caused the accident and why and if your car is insured, this can help you claim your insurance. They can also provide footage that might record vandalism or theft when your car is parked.

Are All Dash Cams Built-in?

Not all dashboard cameras are built-in. Some latest vehicle models are equipped with factory-fitted dash cams with an option of it being standard or as an optional extra, but most dash cams these days are fitted as an aftermarket accessory.

Where Can I Get A Dash Cam?

You can get dash cams from Auto parts suppliers, auto electricians, online, home entertainment retailers, electronic stores and car sound system retailers, and some of these offer installations as a service.

What Types Of Dash Cams Are Available?

There are several types of dashboard cameras, namely:

Single Channel: these dashboard cameras are one-directional and they usually face the front of the vehicle.

Dual-Channel: The view that these dashboard cameras offer is that of front and real view as they are equipped with a dual-camera view.

What Happens When The Storage Fills Up?

When dash cam recording storage fills up, your camera will not over-write old footage unless you manually format it. Instead, when it is full, the dash camera will stop recording.

This is why getting a good memory card for storage of portable recording devices is better so they do not fill up frequently. Unless you get say 120GB memory card off Amazon, the device usually stops recording as there is no storage media to keep the footage to be recorded.

Another trick is to save your recorded files in the cloud storage as there’s need to make some space in your physical storage card by deleting some of the old footage. If you are not keen on deleting das cam recordings, then you can choose to insert a new memory card if you choose to keep recording.

If you see this, you might think there’s a huge issue with dashboard cameras. The thing is they record all the time which implies that they would fill up real fast and even if you have a huge SD card to be used for storage, it will still fill up and who would want to be changing storage while driving? None!

This is also another reason built-in cameras really do better than alternative cameras. Contrary to general recording devices, a dashboard camera is designed to automatically overwrites the oldest files on its storage media in the case that the storage media has filled up and it can it record any more new footage.

This feature would be disastrous if it was put in a digital camera or any general recording device as some precious footage that you might want to keep might be deleted although it works great surveillance band surveillance devices.

Do Dash Cams Work While The Car Is Off?

Not all dash cameras work while the car is off. This only happens when you have a dashboard camera equipped with such an option and installed and programmed when the vehicle is off.

This mostly works on high-end Dash cameras with motion detection capabilities. If you choose to record constantly, you can also purchase dash board cameras.

Can Dash Cam Video Be Used With Insurance Claims?

Not all states, EU countries, or Insurance companies accept dash cams as part of recorded video evidence for insurance claims.

However, more and more car manufacturers are designing vehicles with built-in dash and reversing cameras, forcing the insurance industry to consider dashcam video recordings widely acceptable seriously. Though dashboard camera video is acceptable for insurance claims, it can be double-edged when you are in the wrong.

So, when you are involved in any accident that requires insurance claiming, most insurance companies ask if the person has a footage pertaining to the accident. This will give you greater chances of getting your insurance coverage or no claims bonus unaffected when no fault is proven using a dash camera.

Can I Use A Dash Cam To Spy On My Vehicle’s Occupants?

In some countries, recording someone or the public is illegal; however, some high-end dash cams have the option of being operated and viewed while the car is miles away from home(external access to in-car audio and footage.)

What Should You Consider When Buying A Dashcam?

Connectivity: choose according to your lifestyle and ease of use.

Heat protection: it is quite obvious that vehicles tend to have high temperatures hence it is important to choose a dash cam which will persist.

Price: expensive is not always great quality, make sure to buy a dash cam in your league and which can efficiently work.

Video quality: it is of Paramount importance to purchase a dash cam that can provide footage of good quality when it is needed.

Lens: make sure you get a dashcam equipped with the best range of view and quality that works for you.

Size: make sure to get a cam of the required size as a correctly fitted dash cam can not legally be within your field of view when driving.

Having looked at dash cameras a bit in detail, we now know that dash cams can record sound as the footage is required to have sound hence they are equipped with a sound recording component.

link to Can You Use Your Own Router With Vodafone Broadband?

Both the Vodaphone internet broadband and mobile services are very popular in the united kingdom due to the reliability and fast connection. The popularity of Vodafone also gave rise to the use of...